pATRON SAINT OF OUR MISSION PARISH 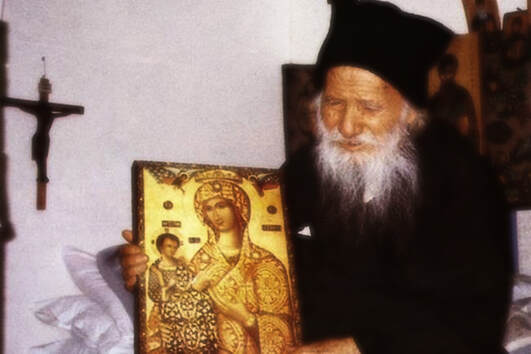 Saint Porphyrios  (7 February 1906 - 2 December 1991) was an Athonite hieromonk known for his gifts of spiritual discernment, a type of clairvoyance which he sometimes called "spiritual television."
​
He was born February 7 in the little village of Saint John Karystia, in the province of Evia, Greece. His parents, Leonidas and Eleni Bairaktaris (daughter of Antonios Lambrou), baptized him Evangelos. He was fourth out of five siblings. Only his youngest sister is still alive and is a nun.

His family was quite poor and so Evangelos left school at an early age to assist his family to make more money. His first job was to tend the family's sheep. At some stage, he found a job working at a grocery store in Chalkidiki and also Piraeus. He was taught to pray the Paraklesis by his father and all other religious matters.

He was tonsured a monk at the age of fourteen or fifteen with the monastic name Nikitas. He served in the Athonite skete of Kafsokalyvia, in the Cell (kellion) of Saint George, under two spiritual fathers: Father Panteleimon and Father Ionnakios. Forced by pleurisy to depart the Holy Mountain, he returned to his birthplace, where he was unexpectedly elevated to the priesthood at the age of 21 by Porphyrios III, Archbishop of Mount Sinai and Raithu.

With the outbreak of World War II, he became a hospital chaplain in Athens, in which post he continued for three decades (1940-1970). His later years were devoted to the construction of the Holy Women's Monastery of the Transfiguration of the Savior.

After 1984 he returned to Mount Athos, occupying the same cell which he had earlier in life been forced to abandon. Through his role as a spiritual father, Elder (Geronda) Porphyrios became known to an ever-wider circle of Orthodox followers. Several compilations of stories and sayings attributed to him have been published.

His sainthood was declared by the Synod of the Ecumenical Patriarchate on November 27, 2013.